6.9
Director: Lewis MilestoneWriters: Ben Hecht, S.N. BehrmanStars: Al Jolson, Madge Evans, Frank MorganSummary: Bumper (Al Jolson) is a vagabond leader of a strange group of tatterdemalions and eccentrics who hang around New York's Central Park. Among his followers are Egghead (Harry Langdon), Sunday (Chester Conklin), Acorn (Edgar Conner) , The General (Victor Potel), Orlando (Tammany Young) and Apple Mary (Louise Carver). Bumper's idol is Mayor Hastings (Frank Morgan), whose life he once saved and frequently has lunch at the Park Casino. Bumper is always on hand to open the door of the Mayor's Rolls Royce, and the Mayor makes it a point to linger a moment at the entrance and listen to the whimsical Bumper's philosophy and ideas abut life. Through his contact with the Mayor, Bumper is able to "fix" things when the other vagabonds get in trouble. The Mayor cannot fathom why Bumper, an unusually bright fellow, is content to spend his life in the park, doing nothing. The Mayor, for all his power and popularity, is unhappy. He's in love ----and madly jealous. He believes his sweetheart June ... Written by Les Adams <[email protected]>
Also known as: Hallelujah I'm a Bum (on a region-free DVD). 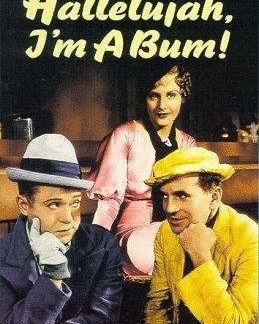