This sale is for Golden Rendezvous (1977) starring Richard Harris on DVD.

5.5
Director: Ashley Lazarus, Freddie FrancisWriters: Stanley Price, John GayStars: Richard Harris, Ann Turkel, Gordon JacksonSummary: Aboard the cargo vessel converted into a luxury cruise ship, S.S. Campari, somewhere in the Caribbean is lying in port, due to a succession of delays. Chief Officer Johnny Carter, who has to put up with a moody Captain, and the unwanted charms of the beautiful young Susan Beresford, realizes these delays are due to sabotage, and that there is something seriously wrong. When the Campari finally sails, a member of the crew is suddenly missing. An unsuccessful stem to stem search for the crew member, with violence suddenly erupting endangers the whole ship. The ship is then controlled by a master criminal, whose intention is not a simple hijacking and ransoming of the wealthy hostages on board. So, what exactly does he have in mind? Written by Denzil Almeida
Also known as: Golden Rendezvous (on a region-free DVD). 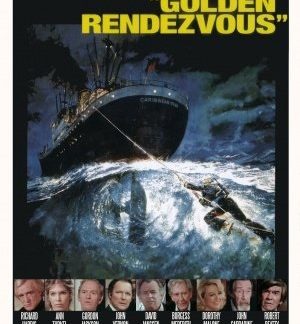