This sale is for God sobaki (1994) with English Subtitles on DVD.

6.8
Director: Semyon AranovichWriters: Semyon Aranovich, Zoya KudryaStars: Inna Churikova, Igor Sklyar, Aleksandr FeklistovSummary: Sergei has been released from jail, where he has served a sentence for various criminal offences. Because of his past and his aggressive, disillusioned character, he experiences serious difficulties in finding his place in society. His attempt to take advantage of Vera, a naïve middle-aged woman, has an unexpected consequence, as a tender, hesitant relationship develops between them. Unfortunately, Sergei gets involved in a fight where one of his opponents is mortally wounded. He escapes with Vera to the countryside, and the odd couple manage to hide in an abandoned village. Soon, they realize that something is wrong with their hideout. Written by Eduardo Casais <[email protected]>
Also known as: God sobaki (on a region-free DVD). 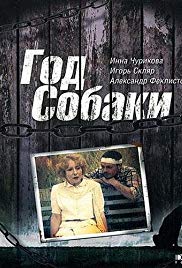