This sale is for Ghost Diver (1957) starring James Craig on DVD.

5.7
Director: Richard Einfeld, Merrill G. WhiteWriters: Richard Einfeld, Merrill G. WhiteStars: James Craig, Audrey Totter, Nico MinardosSummary: Rico, a South American diver, seeking the lost treasure of the Paracas, finds a Paracan idol, with its eyes of sun and moon, and realizes he has found the key to a fortune. He tells Manco, the sweetheart of his daughter Pele, and the greedy Manco cuts the lifeline to Rico's diving gear and watches the old man sink to the ocean floor. The idol, with both eyes now missing, comes into the hands of star of a television adventure series Roger Bristol, who, with his son Robin and secretary Anne Stevens, sets out to find the lost treasure. Written by Les Adams <[email protected]>
Also known as: Ghost Diver (on a region-free DVD). 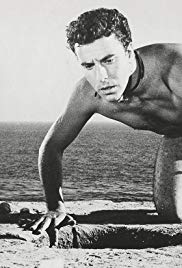