Ghastly (2011) with English Subtitles on DVD


This sale is for Ghastly (2011) with English Subtitles on DVD.

5.0
Director: Ko Seok-jinWriters: Kim Yoo-raStars: Eun-jeong Han, Hyomin, Hyung-Suk LeeSummary: Bin is the survivor of a horrific murder, and while the police try to find the killer he is given into the care of his Aunt and Uncle. They move in with him in his house, which his Aunt, Seo-Ni, and her younger sister begin to have nightmares of Bin killing them. Seo-Ni soon learns that her house is cursed as well as the true circumstances of her in-laws death, of whom she was told died in a car accident. In the meantime, Bin is acting strangely and his classmates are beginning to disappear. Seo-Ni begins to suspect Bin is not the innocent child she hopes he is, especially after finding some disturbing items in his room. Her investigation leads her to a the answer to the terrible secret haunting Bin's house, and presents her with an awful choice to make in order to vanquish a vengeful spirit. Written by Wabousse
Also known as: Ghastly (on a region-free DVD). 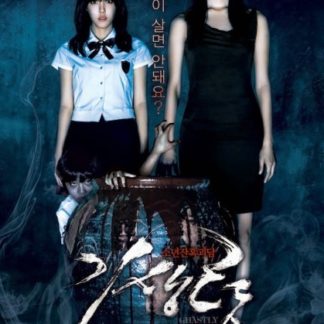