This sale is for G-Men from Hell (2000) starring William Forsythe on DVD.

4.5
Director: Christopher CoppolaWriters: Richard L. Albert, Mike AllredStars: William Forsythe, Tate Donovan, Bobcat GoldthwaitSummary: Dean Crept and Mike Mattress are two government agents, 'G-men' whom are murdered in an ambush and sent straight to the hot and fiery realm of hell. Dean and Mike manage to escape using a magical dimension traveling crystal to land them back on Earth where they decide to open their own private investigating service, with some stolen money from their killer Buster Lloyd, and soon land a fashionable office space with an attractive and loyal secretary-of-all-trades named Marete. Dean and Mike's first job is to help a mysterious femme fatal named Gloria Lake who fears her wealthy husband is plotting to swindle out of her inheritance. But before that can happen, the husband is murdered, and Dean and Mike are the suspects. With a relentless police detective tailing them, Dean and Mike try to solve the case, while dealing with the Devil's agent who follows them up from hell to bring them back within 46 hours. Written by matt-282
Also known as: G-Men from Hell (on a region-free DVD). 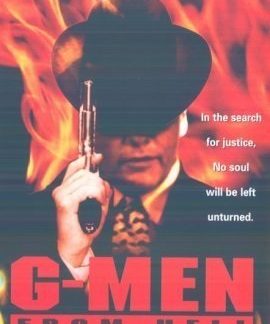