Fudoh: The New Generation (1996) with English Subtitles on DVD


This sale is for Fudoh: The New Generation (1996) with English Subtitles on DVD.

Director: Takashi MiikeWriters: Hitoshi Tanimura, Toshiyuki MoriokaStars: Shôsuke Tanihara, Miho Nomoto, Tamaki KenmochiSummary: Set on the island of Kyushu, it tells the story of successful high school student Riki Fudoh, who leads a double life in organized crime. With his gang of underage assassins (forerunners of the kiddie killers in Dead or Alive 2 (2000), including five-year-olds with hand guns and a teenage stripper shooting deadly darts from her vagina) he not only controls the goings-on at his school, but aspires to take over criminal affairs on the entire island. Fudoh's true motivations are not just a lust for power. An extensive flashback at the film's opening shows how as a child he witnessed the grisly murder of his older brother at the hands of his yakuza boss father and his subsequent wish for revenge. Buckets of blood flow (literally) when Riki and the kids start an assassination campaign against the top figures of the local yakuza, with his father as the ultimate goal. The underworld goes into a state of panic and calls in mysterious and powerful problem solver Nohma. Riki's father meanwhile ... Written by Fudoh
Also known as: Fudoh: The New Generation (on a region-free DVD).

Be the first to review “Fudoh: The New Generation (1996) with English Subtitles on DVD” Cancel reply 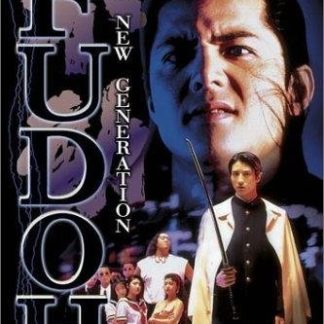