This sale is for Framed (1990) starring Jeff Goldblum on DVD.

5.3
Director: Dean ParisotWriters: Gary RosenStars: Jeff Goldblum, Kristin Scott Thomas, Todd GraffSummary: In Paris, Interpol arrests an art forger ten minutes after his sweetheart leaves the apartment with 5 million francs. She's set him up. Two years later, Wiley's out of jail, bartending in L.A., trying to forget her. Kate shows up with a new name, a fiancé who's a mob boss, and a scheme to steal and sell a priceless Modigliani if Wiley will forge a painting to put in its place. An odd FBI agent named Joak threatens Wiley with more jail time if Wiley doesn't help sting Kate. Who will win out: the mob, the FBI, Wiley, his lying cheating sweetie, or some surprising combination? Written by <[email protected]>
Also known as: Framed (on a region-free DVD). 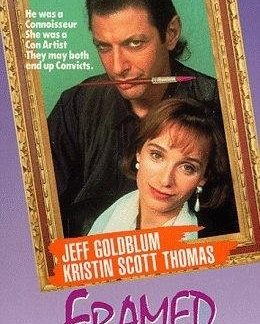