This sale is for Forbidden Cargo (1954) starring Jack Warner on DVD.

6.5
Director: Harold FrenchWriters: Sydney BoxStars: Jack Warner, Nigel Patrick, Elizabeth SellarsSummary: After a successful operation against drink smugglers, Customs and Excise get wind of a planned large illegal drug shipment. An Agent is sent to Cannes to follow the brother and sister apparently involved, though he starts to get rather closer to the attractive young lady than planned. The trail leads via a fashion house to a freighter bound for the Pool of London, and the net starts to close in. Written by Jeremy Perkins {J-26}
Also known as: Forbidden Cargo (on a region-free DVD). 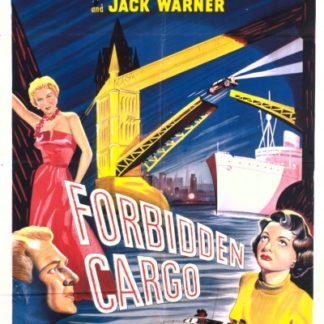