Fantômas: In the Shadow of the Guillotine (1913) with English Subtitles on DVD


This sale is for Fantômas: In the Shadow of the Guillotine (1913) with English Subtitles on DVD.

7.0
Director: Louis FeuilladeWriters: Marcel Allain, Louis FeuilladeStars: René Navarre, Edmund Breon, Georges MelchiorSummary: Princess Sonia Danidoff is staying at the Royal Palace Hotel, Paris, and withdraws $20,000 from the cashier's custody, placing the notes in a drawer in company with her magnificent rope of pearls. A few moments after a well-dressed stranger steps from behind the curtains and, with the coolest of sangfroid, steals the valuables in the very presence of the princess, and with a polite bow hands her his card and makes a dignified exit. Upon the card the name "Fantomas" slowly appears. The police are quickly upon the scene, but Fantomas, true to his nom de plume, has vanished. Inspector Robert Juve is the sleuth entrusted to track the mysterious marauder. But before Juve has time to move in the matter of the princess's jewels and cash, another escapade of Fantomas' is thrust upon him to investigate. Lord Beltham is missing. Juve calls on Lady Beltham, and in a man's hat finds the initial "G." With so slight a clue Juve tracks down "Gurn" (none other than the elusive Fantomas) to his ... Written by Moving Picture World synopsis
Also known as: Fantômas: In the Shadow of the Guillotine (on a region-free DVD).

Be the first to review “Fantômas: In the Shadow of the Guillotine (1913) with English Subtitles on DVD” Cancel reply 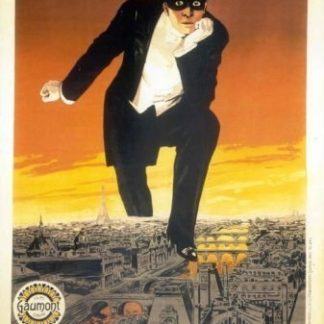