This sale is for Fade to Black (1980) starring Dennis Christopher on DVD.

Director: Vernon ZimmermanWriters: Vernon ZimmermanStars: Dennis Christopher, Tim Thomerson, Gwynne GilfordSummary: Shy, lonely Eric Binford delivers film cassettes and film-related supplies in Los Angeles for a living. But he really exists only to watch movies and immense himself in fantasies about cinematic characters and stars. Frequently bullied and betrayed, Eric comforts himself by pretending to be one of the many tough heroes and villains who have captivated him from the silver screen. However, his sanity takes a turn for the worse and he launches grotesque murders all patterned after characters and incidents from his beloved movies. He becomes known as the Celluloid Killer, one of the most horrifying murderers the city has ever known. Written by matt-282
Also known as: Fade to Black (on a region-free DVD). 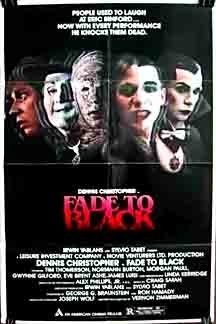