This sale is for Escapes (1986) starring Vincent Price on DVD.

4.3
Director: David SteenslandWriters: David SteenslandStars: Vincent Price, Todd Fulton, Jerry GrishamSummary: A strange mailman delivers a videotape titled "Escapes" to young Matthew Wilson. Matt gets curious and decides to give it a watch. The movie turns out to be a horror anthology with legendary horror actor Vincent Price as the host, who introduces every of the six segments. The first segment titled "A Little Fishy" follows a fisherman, who ends up being the bait. "Coffee Break" follows a delivery man, who gets lost and ends up in the one town you can't get lost in... or leave. "Who's There" follows a man, who finds a baby Sasquatch in the forest, withe terrifying results. "Jonah's Dream" follows a widow in financial trouble, who finds a UFO in her late husband's mine along with something else. "Think Twice" follows a homeless guy, who gets robbed, but a strange glowing crystal he finds, allows him to dispense his own unique kind of justice. The sixth and final segment, "Hall of Faces", follows Matt again, who ends up in the place where Price is hosting from.
Also known as: Escapes (on a region-free DVD). 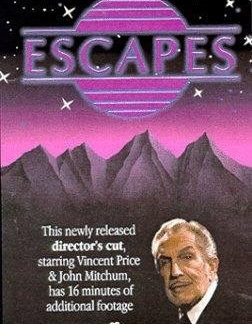