Emil and the Detectives (1964) starring Walter Slezak on DVD


This sale is for Emil and the Detectives (1964) starring Walter Slezak on DVD.

6.2
Director: Peter TewksburyWriters: AJ Carothers, Erich KästnerStars: Walter Slezak, Bryan Russell, Roger MobleySummary: When Emil travels by bus to Berlin to visit his grandmother and his cousin, his money is stolen by a crook who specializes in digging tunnels. Emil must get the money back as it is for his grandmother. While following the thief, Emil runs into Gustav, an enterprising young boy who gathers up all his friends to help Emil find the money. Emil's cousin also gets involved and they get into more trouble than they bargained for when Emil's pickpocket turns out to be mixed up with a couple of notorious bank robbers. Written by April M. Cheek <[email protected]>
Also known as: Emil and the Detectives (on a region-free DVD). 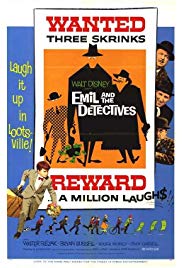