Edge of Outside (2006) starring Peter Biskind on DVD


This sale is for Edge of Outside (2006) starring Peter Biskind on DVD.

6.8
Director: Shannon DavisStars: Peter Biskind, Robert Townsend, Edward BurnsSummary: An hour-long documentary designed to celebrate the spirit of the independent filmmaker from D.W. Griffith to Quentin Tarantino. Interview footage and film clips are blended together to form a chronological approach to the subject matter. Profiles of important figures within the independent film industry include John Cassavetes, Stanley Kubrick, John Sayles, Woody Allen, Roger Corman, Samuel Fuller, Martin Scorsese, Orson Welles, Arthur Penn, Spike Lee, Peter Bogdanovich, Sam Peckinpah, Nicholas Ray, and Henry Jaglom. The documentary compiles new and stock interviews with important filmmakers including Cassavetes, Corman, Bogdanovich, Fuller, Scorsese, Welles, Penn, Sayles, Ray, Peckinpah, Lee, and Jaglom. The program also covers important movements in the history of independent cinema such as the Italian neorealism and the French New Wave. The documentary makes it clear in the emphasis that an independent film is not simply a low-budget film, but instead, accurately defines the genre ... Written by alfiehitchie
Also known as: Edge of Outside (on a region-free DVD).
Source: imdb.com 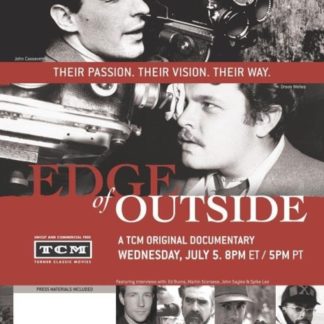