6.3
Director: Norifumi SuzukiWriters: Masahiro Kakefuda, Norifumi SuzukiStars: Reiko Ike, Sandra Julien, Hiroshi MiyauchiSummary: Young Yuki runs away from home after villainous boyfriend of her mother, Kinue who is a prostitute rapes her. She quits her school and ends up using sex to survive. During a fight at a club she is saved by an older yakuza, Oba and she becomes his mistress for two years. When he is injured in a fight and becomes impotent, she leaves him and finds another sugar-daddy. She soon gets bored with him and finally meets a nice architecture student, Yôichirô , son of a yakuza. She starts thinking that her suffering may be over, but is it? Yakuza wants her to work for them and they have tricks. Written by Pulp
Also known as: The Insatiable (on a region-free DVD). 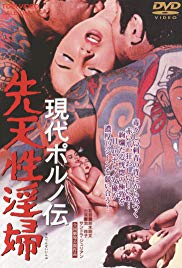