6.2
Director: Frank PerryWriters: Pete HamillStars: Stacy Keach, Faye Dunaway, Harris YulinSummary: One night of 1881, Doc Holliday, a famous poker gambler, enters the 'No Name Saloon'. There, he challenges a man to poker, betting his horse against his opponent's fiance. Doc wins and from now on, Katie Fisher, also known as Katie Elder, will follow him wherever he goes. Their next destination is Tombstone, where the law is represented by Sheriff Wyatt Earp. When they arrive, the election campaign is in full swing. Earp runs for candidate but the Clantons, a family gang of outlaw cowboys, are not among his keenest supporters. Conflict erupts following the failure of some shadowy bargaining and Doc decides to join Wyatt and his brothers. The four of them gather at the O.K. Corral where the seven Clanton brothers are waiting for them. Written by Guy Bellinger
Also known as: 'Doc' (on a region-free DVD). 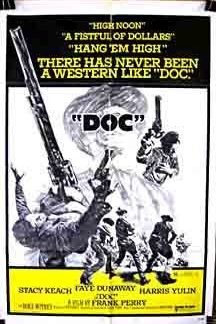