This sale is for Devil Hunter (1980) with English Subtitles on DVD.

3.5
Director: Jesús FrancoWriters: Julián EstebanStars: Ursula Buchfellner, Al Cliver, Antonio MayansSummary: After World War 2, Senior Japanese Officials and their followers were killed and buried together in China, after being defeated and forced to give in. The Japanese Evil People of Nine Chrysanthemum have sworn revenge and are secretly plotting against China after sealing the graves of the Officials. Before their conspiracy can come to an end, Chinese police Captain Li and Taoist master Mao Yuan Feng discover the conspiracy and kill some of the Japanese Evil People. The members who survived used then their blood to call them back from Hell and became Devil Masters. But before their Japanese Imperialist Agressive Ambition can succeed, Captain Li and Taoist Master Mao Yuan Feng kill them and defeat their plot of revenge for good. Written by Eric Louzil
Also known as: Devil Hunter (on a region-free DVD). 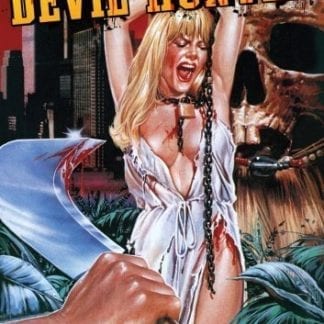