This sale is for Desert Warrior (1988) starring Lou Ferrigno on DVD.

3.9
Director: Jim GoldmanWriters: Bob DaviesStars: Lou Ferrigno, Shari Shattuck, Walter AbbotSummary: In the post-nuclear wastes of Earth two civilizations fight for survival. The Tyrogs, who dwell in the City of Doom, and the Drones, who live underground, free from the high levels of radiation brought about in The Cataclysm. Baktar, leader of the Tyrogs, has just had a child, but the radiation has caused the child to be born a mutant, so he sends Zerak (Lou Ferrigno), his right hand man, to find an unaffected woman. Racela, a beautiful Drone, has chosen the wrong time to venture out of the underground shelter, as Zerak finds and captures her for his leader. However, while guarding her in prison, Zerak falls for Racela and decides to leave the City of Doom with her. With the two groups about to go to war, Zerak must fight his way through his former allies to get Racela to safety. Shot on location in the Philippines, the sprawling landscapes provide for massive battles in this faced-paced science-fiction saga. The nuclear war is over but the fight for survival has just begun... Written by TheUnbeholden
Also known as: Desert Warrior (on a region-free DVD). 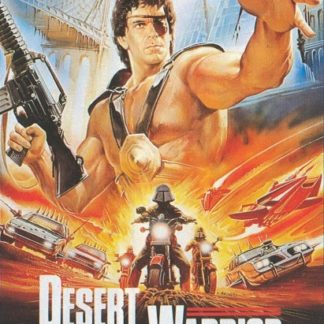