Deceiver (1997) with English Subtitles on DVD


This sale is for Deceiver (1997) with English Subtitles on DVD.

Director: Jonas Pate, Josh PateWriters: Jonas Pate, Josh PateStars: Tim Roth, Chris Penn, Michael RookerSummary: Textile company heir James Wayland (Tim Roth) is accused of murder of a prostitute named Elizabeth (Renée Zellweger), whose body was found cut in two in the park. The murder is investigated by tough Detective Edward Kennesaw (Michael Rooker) and his less experienced partner Phillip Braxton (Chris Penn). Wayland is a heavy drinker and compulsive liar, he is prone to memory losses and periods of heavy violence. He is rich enough to access necessary information, and he gets the interrogators' own dark secrets - Kennesaw is angry about affairs his wife had and had let off steam with Elizabeth, and Braxton has gambling debts with Mook (Ellen Burstyn), who is demanding payment.
Also known as: Deceiver (on a region-free DVD). 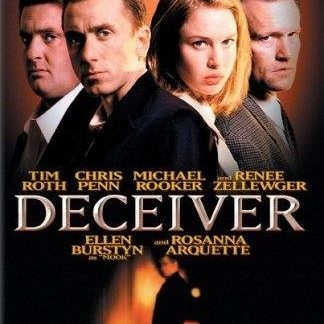