Death Rides a Horse (1967) with English Subtitles on DVD


This sale is for Death Rides a Horse (1967) with English Subtitles on DVD.

7.1
Director: Giulio PetroniWriters: Luciano VincenzoniStars: Lee Van Cleef, John Phillip Law, Mario BregaSummary: Before his very eyes, a young boy watches the cutthroats of a small gang raid his humble home, rape and slaughter his whole family. Fifteen years later, Bill Meceita, the once-helpless boy and the sole survivor of the massacre, has now become a cool and skilful sharpshooter, seeking revenge against the band of unknown killers. In the meantime, the seasoned gunslinger and freshly out of prison, Ryan, has already embarked on a journey of sweet retribution, unaware that before long, he will cross paths with Bill, sharing the same desire for justice. But what could possibly unite the two unlikely companions? Written by Nick Riganas
Also known as: Death Rides a Horse (on a region-free DVD). 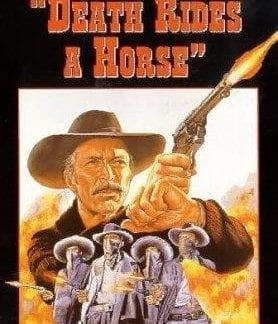