This sale is for Dead Stop (1995) starring Robert McFaul on DVD.

3.2
Director: Allan SmytheWriters: Allan SmytheStars: Robert McFaul, Chris Chinchilla, Tina MosnerSummary: In the low-budget, direct-to-video slasher picture Dead Stop, Jack the Ripper returns to wreak havoc on a small American town, and litters the neighborhood with a series of mutilated, eviscerated corpses. When he slays journalist J. Looker's girlfriend, Looker becomes the number one suspect and scapegoat - and must embark on a quest to clear his own name and bring the maniac to a bitter end. Written by Genital Apparatus
Also known as: Dead Stop (on a region-free DVD). 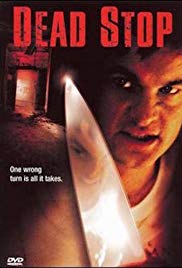