This sale is for Dancing with Crime (1947) starring Richard Attenborough on DVD.

6.7
Director: John Paddy CarstairsWriters: Peter Fraser, Brock WilliamsStars: Richard Attenborough, Barry K. Barnes, Sheila SimSummary: At the end of World War II, demobilized soldiers Ted Peters (Sir Richard Attenborough) and Dave Robinson (Bill Owen) return home to Britain, where Ted becomes a taxi driver and Dave gets involved with the mob. Enjoying his lifestyle and the easy money, Dave offers to recruit his pal Ted, who works hard for his money. Ted refuses, and Dave gets in a spat with his mob boss over money. When mob henchman Paul Baker (Barry K. Barnes) shoots Dave, he runs and takes cover in Ted's taxi while Ted is having lunch. Eventually, Ted discovers his pal's lifeless body inside the cab. Scotland Yard starts an investigation, considering Dave's underworld affiliations. Mob boss Gregory (Barry Jones) believes that somehow taxi driver Ted knows the circumstances of his friend Dave's violent death, therefore Gregory decides to have Ted eliminated. For his part, Ted decides to investigate, on his own, the suspicious death of his friend Dave. Written by nufs68
Also known as: Dancing with Crime (on a region-free DVD). 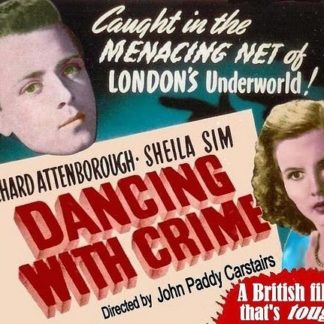