This sale is for Convicted (1950) starring Glenn Ford on DVD.

6.8
Director: Henry LevinWriters: Martin Flavin, William BowersStars: Glenn Ford, Broderick Crawford, Millard MitchellSummary: Joe Hufford gets involved in a nightclub brawl, kills a man in self defense, and is sent to prison for manslaughter, to the dismay of district attorney George Knowland who realizes Joe had an incompetent lawyer who should have gotten him off by proving self-defense. Later, Knowland becomes warden of the prison Joe is in, and makes him a Trusty and his chauffeur. Joe and the warden's daughter, Kay, fall in love but Joe gets involved in a prison escape. Written by Les Adams <[email protected]>
Also known as: Convicted (on a region-free DVD). 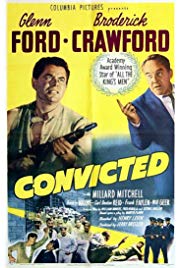