This sale is for Chu Chu and the Philly Flash (1981) starring Alan Arkin on DVD.

4.2
Director: David Lowell RichWriters: Barbara Dana, Henry BarrowStars: Alan Arkin, Carol Burnett, Jack WardenSummary: Flash used to be a talented baseball player, but he took to drinking and now he sells stolen watches in the streets. One day he meets Chu Chu, who, before falling into alcoholism like him, was a successful entertainer. Now she still dances, but in the streets, for no more than a cent or two. Luck seems to smile at them the day they find stolen government documents forgotten some place. They decide to return them to their legal owners, but instead of the expected reward money, all they get is a load of trouble. Written by Guy Bellinger
Also known as: Chu Chu and the Philly Flash (on a region-free DVD). 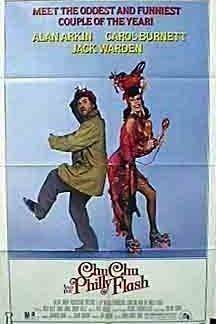