Celestine, Maid at Your Service (1974) with English Subtitles on DVD


This sale is for Celestine, Maid at Your Service (1974) with English Subtitles on DVD.

5.1
Director: Jesús FrancoWriters: Nicole GuettardStars: Lina Romay, Howard Vernon, Olivier MathotSummary: At the beginning of the 20th century: A police raid broke into a clandestine brothel in which Célestine is a boarder. Everyone is rounded up, but she manages to escape. She is collected by Sébastien, the gardener who sleeps with her, then by Malou, the valet who does the same. The two men propose to the Countess Bringuette to take her in her service as a maid. From this moment Célestine will sleep with almost all the occupants of the castle (with the exception of the prude countess). As for the old bedridden duke, he will be entitled to a few pages of erotic reading every day. One day a former henchman from the brothel finds her trace and forces her to help him rob the castle and leave with him. The whole household of the castle, convinced of her innocence, came to help her. But when she could have kept a pampered place at the castle it is with regret that she leaves him - for other adventures. Written by Wiki
Also known as: Celestine, Maid at Your Service (on a region-free DVD).

Be the first to review “Celestine, Maid at Your Service (1974) with English Subtitles on DVD” Cancel reply 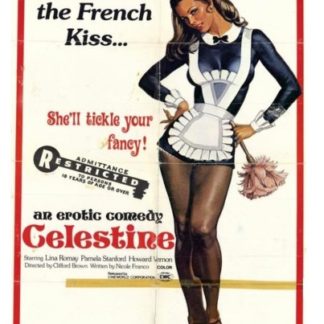