This sale is for Camp Slaughter (2004) starring Christian Magdu on DVD.

1.8
Director: Martin MuntheWriters: Alina WarneStars: Christian Magdu, Karin Bertling, Michael ManssonSummary: About 25 years ago an unholy child was born in an ancient noble family. The parents were the mother and son of the family. The goal was to create the perfect daughter, but instead she gave birth to a monster! The son, whose only interest are rabbits, called the monster Bunny Man, and placed him in a hole in the woods. He supplied his son with food and rabbits, to play with. Unfortunately, the lack of human contact made him violent, and his rabbits died when during his so called games. One day the son forgets to lock the hole and Bunny Man suddenly finds himself free, in a world he's never seen and doesn't understand. At the same time, a group of kids arrive at a cabin in the woods to throw a party. Kids that, to an untrained eye, seem quite similar to rabbits... Written by Djoni Pony
Also known as: Camp Slaughter (on a region-free DVD). 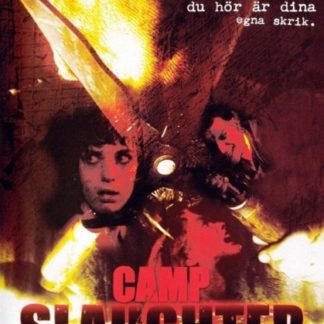