5.9
Director: William Hamilton, Edward KillyWriters: Harry Leon Wilson, Edmund H. NorthStars: Owen Davis Jr., Louise Latimer, Robert McWadeSummary: Bunker Bean, a meek office clerk, has grandiose dreams but seems destined to remain forever in his lowly station. He seeks out the help of a fortune- teller, who tells him he is the reincarnation of Napoleon and also of an Egyptian Pharaoh. Armed with his new sense of power, Bunker proceeds to win the hand of his boss' daughter and also outwits her cutthroat father in a business deal. Now a winner, Bean suddenly learns that the crystal ball-gazer was a phony, and that he found success not through any aristocratic bloodlines but through sheer spunk and belief in his own abilities. Written by Dan Navarro <[email protected]>
Also known as: Bunker Bean (on a region-free DVD). 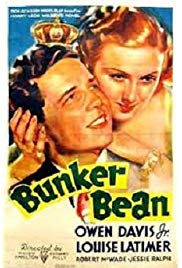