5.2
Director: Charles E. CullenWriters: Charles E. CullenStars: Charles E. Cullen, Nelson Oliver, ZombieSummary: Two gay bikers unearth a mysterious artifact while performing an archaeological dig at a remote river. A peculiar disc jockey living in the same town with a fancy of the supernatural and conjuring spirits. Whether it be the strange artifact or the work of the disc jockey, the town of Mayor's Cove, run by a prejudice government, now has a strange albino black drifter from the Voodoo Dolls motorcycle gang wreaking havoc on the Krackers gang. Chock full of violence, rebellion, homosexuality and voodoo, "Bros on Bikes" is unlike any motion picture of its genre! Written by anonymous
Also known as: Bros on Bikes (on a region-free DVD).

Be the first to review “Bros on Bikes (2012) starring Charles E. Cullen on DVD” Cancel reply 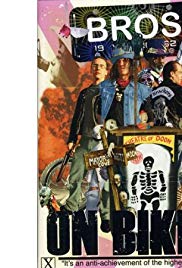