This sale is for Bowery Blitzkrieg (1941) starring Leo Gorcey on DVD.

6.2
Director: Wallace FoxWriters: Brendan Wood, Donn MullahyStars: Leo Gorcey, Bobby Jordan, Huntz HallSummary: East Side Kids: Fighters Danny Breslin and Muggs McGinnis, once boyhood chums, have drifted apart. Policeman Tom Brady - because his own former friend fell into a life of crime and got the electric chair - takes rough and tumble Muggs under his wing to turn the lad's life around, but Danny, brother of Mary Breslin (whom Tom plans to marry), is also at risk. Everyone believes studious Danny is on his way to being president someday, but while Tom's focus goes toward putting Muggs on the straight and narrow, ambitious petty criminal Monk Martin's been working slyly on steering Danny into a life of crime. Adding a little complication, racketeers get involved, trying to set up a fixed fight with Muggs. Written by statmanjeff
Also known as: Bowery Blitzkrieg (on a region-free DVD). 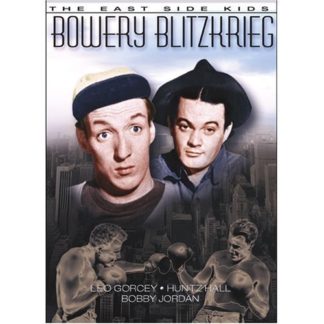