This sale is for Bowery Battalion (1951) starring Leo Gorcey on DVD.

6.5
Director: William BeaudineWriters: Charles R. Marion, Bert LawrenceStars: Leo Gorcey, Huntz Hall, Donald MacBrideSummary: Slip and the other Bowery Boys join the army and to their camp, shortly after they enlist, comes their old friend and benefactor, Louie Dumbrowsky. Louie had served as a corporal in World War One, but he walks into camp wearing the insignia of a major - something of a surprise to the boys until they learn he alone has the key to the death-dealing hydrogen ray. Foreign agents want the secret and through the efforts of their fellow spy, Marsha, the private secretary to Colonel Hatfield, they kidnap Major Louie. The boys go A.W.O.L. to rescue him. Written by Les Adams <[email protected]>
Also known as: Bowery Battalion (on a region-free DVD). 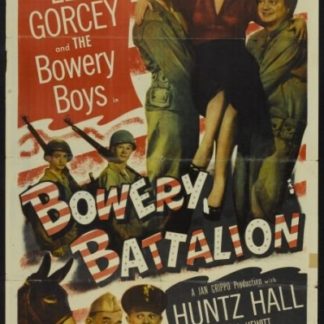