This sale is for Borderline Normal (2001) starring Robin Dunne on DVD.

6.2
Director: Jeff BeesleyWriters: Larry MollinStars: Robin Dunne, Caterina Scorsone, Michael IronsideSummary: Jeremy's world is coming apart. Mom has moved to Windsor and dad has stayed in Detroit with his eldest son. Jeremy moves between warring parents, loving them both but caught in an ugly custody battle. Starting at a new school in Canada complicates all of this. School brings the chance of new friends in an encounter group for children of divorced parents. Here he meets Beth, a tough girl who has found her own way of dealing with her parents divorce. Also pushing Jeremy to reach his own goals is his track coach. Although the stresses of divorce on children are at the center of this story, its focus is Jeremy, a young man everyone wants a piece of; his mother wants him for company and revenge, his girl-friend wants him to be the man in her life, his coach wants him to help the team win, his brother wants him to get lost and his father is determined to have him back at home. Written by Eva Pang <[email protected]>
Also known as: Borderline Normal (on a region-free DVD). 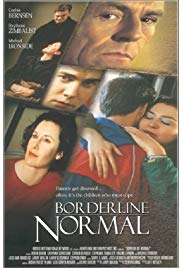