6.9
Director: Teruo IshiiWriters: San Kaji, Kazuo KoikeStars: Tetsurô Tanba, Gorô Ibuki, Tatsuo EndôSummary: In PORNO PERIOD DRAMA, Tetsuro Tanba plays a nihilistic ronin who faces down the "Clan of the Forgotten Eight", who got their name because they lost all their basic emotions like conscience, gratitude, loyalty, shame etc. With his sword Onibouchou (literally: Ogre's Kitchen Knife!) Tanba's character hacks into their ranks in ways that has limbs and severed heads fly everywhere and the blood flows in rivers! On his way, he only stops to take every woman he meets, forcefully if need be! Written by Caterpillar
Also known as: Poruno jidaigeki: Bôhachi bushidô (on a region-free DVD).

Be the first to review “Bôhachi bushidô: Poruno jidaigeki (1973) with English Subtitles on DVD” Cancel reply 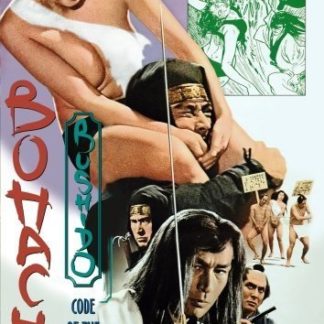