This sale is for Blue Tornado (1991) starring Dirk Benedict on DVD.

4.3
Director: Antonio BidoWriters: Gino Capone, Antonio BidoStars: Dirk Benedict, Ted McGinley, Patsy KensitSummary: While experimenting with a new flight maneuver, Colonel Alex Long and Phil encounter a mysterious light over a mountain range. Phil becomes transfixed, flies into the light and disappears. Alex barely manages to come back and is in shock. The remains of Philip's plane are found later. As inquiries are made, Alex suggests that a UFO could have caused the light. The idea is quickly dismissed and Alex is then accused of having caused Phil to crash and making up the story about the light to cover up his mistake. Alex is temporarily grounded until further notice. Upon researching UFO's, he runs into Isabella, played by Patsy Kensit, who is also doing research on UFO's. She believes his story but no one else does. After the board is unable to prove Alex caused the crash, he can't seem to get the nerve to fly again. He's also outraged that his superiors want to drop the issue as if it never happened. His research with Isabella points to similar UFO sightings around the same mountain range. ... Written by Kristi <[email protected]>
Also known as: Blue Tornado (on a region-free DVD). 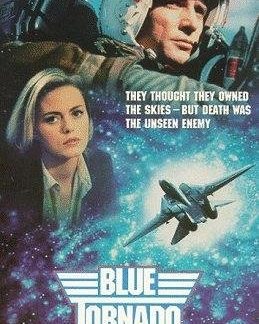