This sale is for Blood Scarab (2008) starring Monique Parent on DVD.

3.2
Director: Donald F. GlutWriters: Donald F. GlutStars: Monique Parent, Del Howison, Brinke StevensSummary: Countess Elizabeth Bathory, history's infamous lesbian vampire who, centuries ago, bathed in the blood of virgins to preserve her youth, arrives from Transylvania to take over the Los Angeles castle of Count Dracula, her vampire husband. At the same time, the 3000 year-old Mummy of Hor-Shep-Sut, an evil Egyptian sorceress, comes to life in a museum and stalks off into the night. Dracula, meanwhile, spends too long watching intended victims Tanya and Mina that, failing to return to the castle before dawn, is destroyed by the light of the rising sun. Renfield, Dracula's insect-eating servant, because he's spent too much time hunting fireflies than watching the time, is guilt-ridden over failing to save his Master. Elizabeth, who despises Renfield, relates to him (in flashback) her sordid blood-bathing past in Transylvania. Then she forces Renfield to find her a female victim. Renfield leads her to Mina, whom Elizabeth seduces in a video store. Elizabeth drinks Mina's blood, thereby ... Written by Anonymous
Also known as: Blood Scarab (on a region-free DVD). 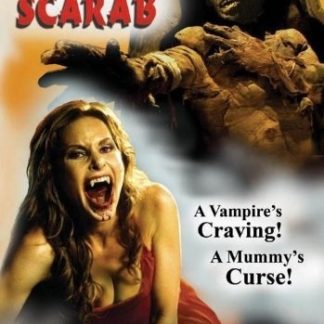