This sale is for Bhowani Junction (1956) starring Ava Gardner on DVD.

Director: George CukorWriters: Sonya Levien, Ivan MoffatStars: Ava Gardner, Stewart Granger, Bill TraversSummary: The year is 1947, the British are on the verge of finally leaving India. Amongst the few who are sorry to see the British leave are the Anglo-Indians, half British and half Indian, for they are going to miss the patronage of their white cousins, the job reservations, and the important status and positions they currently hold. The British, quite frankly, do not think well of Anglo-Indians, nor do the Indians. Victoria Jones is one such Anglo-Indian, a WAC in the British Army, her father a railway engine driver, and her mom a housewife. She is close to another Anglo-Indian, Patrick Taylor, but changes her mind about him as he harbors deep hatred for the Indians. She witnesses Col. Rodney Savage instruct his soldiers to pour filthy water and garbage at the hands of untouchables on high-caste men and women who are protesting by laying down on the railway tracks to prevent trains from moving. Repulsed and shocked at this, she turns to Ranjit Singh Kassi, a Sikh, and longs to be Indian. She... Written by rAjOo ([email protected])
Also known as: Bhowani Junction (on a region-free DVD). 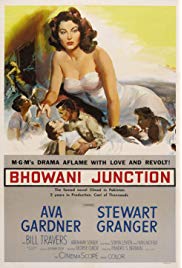