Behind Convent Walls (1978) with English Subtitles on DVD


This sale is for Behind Convent Walls (1978) with English Subtitles on DVD.

5.0
Director: Walerian BorowczykWriters: Walerian Borowczyk, StendhalStars: Ligia Branice, Howard Ross, Marina PierroSummary: A zealous, handsome priest, who is the confessor for a convent full of women, encourages the equally zealous abbess of one such institution to enforce the same strict rules on these unfortunate women that are applied to others. In doing so, they uncover a snake pit of sexual couplings, both lesbian and heterosexual, as well as many tools for masturbation. At the same time, a particularly disturbed inmate manages to poison herself and many of the other novitiates in yet another scandal which is covered up by church authorities. Written by Ørnås
Also known as: Behind Convent Walls (on a region-free DVD). 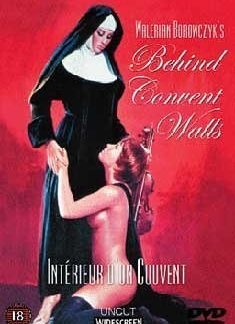