This sale is for Battle Stations (1956) starring John Lund on DVD.

5.8
Director: Lewis SeilerWriters: Crane Wilbur, Ben FinneyStars: John Lund, William Bendix, Keefe BrasselleSummary: A rebuilt WWII carrier sails back to the Pacific theater to rejoin the war in early 1945, a carrier the Japanese think they sank. So if she shows up again, they will go after her with a vengeance. And they do, nearly destroying her again, ending that mission for her, but she is able to limp back to the states. The captain is tough, he knows the added risk for his ship, but shows he also has a heart by not relieving a pilot of flight duty, one who committed a serious mistake by not taking a wave-off as instructed. Lot of action shots, many appearing to be actual war footage. The usual character sub-stories. Partly plays like a documentary about the navy, and the carrier in particular. Maybe a bit of a recruiting film also. Written by [email protected]
Also known as: Battle Stations (on a region-free DVD). 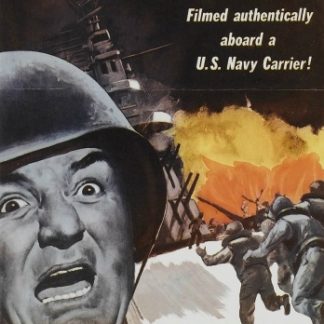