This sale is for Baron Munchhausen (1940) with English Subtitles on DVD.

7.1
Director: Martin FricWriters: Václav WassermanStars: Vlasta Burian, Antonin Mikulic, Meda ValentováSummary: Young secretary Arnost Blaha is behaving very oddly. He married secretly Karlicka, the baron's daughter, and he wants to break the news gently to her parents to make as little fuss as possible. Baron Prasil is a great hunter. He lives only for shooting the deer and winning shooting contests, but he recognizes that something fishy is taking place. No problem, he has a great experience in the field of embarrassing situations. He spent his youth in a very active way, so he keeps (and hides) a detailed evidence of his illegitimate children and corresponding payments. When he finds that Arnost simply wants to call him "father" and no money is involved, he thinks that a sensible caution will solve the problem. Meantime his wife thinks that the new secretary is in love with her and she feels very elated. She tries to send him away. Karlicka wants to stick to the plan, so the young couple tries a heartbreaking story of Arnost's hard life to soften the mother up. They don't know that she had ... Written by stans
Also known as: Baron Munchhausen (on a region-free DVD). 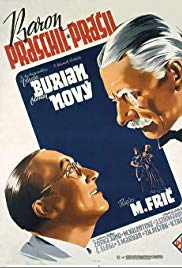