This sale is for Barabbas (1961) starring Anthony Quinn on DVD.

6.9
Director: Richard FleischerWriters: Christopher Fry, Pär LagerkvistStars: Anthony Quinn, Silvana Mangano, Arthur KennedySummary: In times of great upheaval during Passover in early-first-century Jerusalem, the fifth governor of the Roman province of Judaea, Pontius Pilate, finds himself before a pressing dilemma. As part of a tradition, the indecisive ruler offers the agitated crowd the choice to have either Jesus of Nazareth or the murderer, Barabbas, released from Roman custody; but, instead, the people demand the release of the thief. Now, as Jesus takes Barabbas' place on the cross, an inhumane act of punishment paves the way for an arduous spiritual journey of faith, leading Barabbas to Sicily's dark sulphur mines, and the blood-soaked soil of Emperor Nero's Coliseum. Will Jesus' sacrifice set Barabbas, the slave, free? Written by Nick Riganas
Also known as: Barabbas (on a region-free DVD). 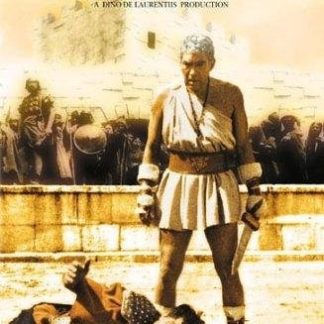