This sale is for Ballistic (1995) starring Marjean Holden on DVD.

4.8
Director: Kim BassWriters: Don LamoreauxStars: Marjean Holden, Corinna Everson, Sam J. JonesSummary: Jesse Gavin is no ordinary policewoman; she knows how to handle herself in any situation. She's an undercover cop, part of an elite police team and highly skilled in lethal martial arts! After a government witness she was supposed to protect is killed, she is suspended from the force. The next day her partner is found dead. Has she been set up? With the help of the two men closest to her heart, her boyfriend and her father, she must battle to clear her name. The deeper she delves, the deadlier the game becomes. There is no denying, she's Ballistic! Written by Imperial Entertainment
Also known as: Ballistic (on a region-free DVD). 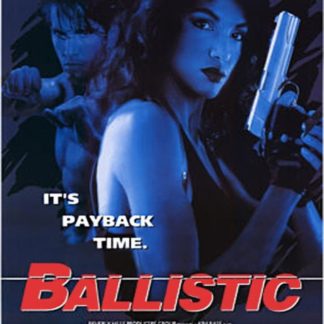