Bad to the Bone (1997) starring Kristy Swanson on DVD


This sale is for Bad to the Bone (1997) starring Kristy Swanson on DVD.

5.6
Director: Bill NortonWriters: Rob FrescoStars: Kristy Swanson, Jeremy London, David ChokachiSummary: Frankie Wells is an evil manipulator. She murders her mother to get her inheritance, but doesn't get caught. Then, two years later, she gets her brother, Danny to murder her boyfriend. Frankie and Danny get arrested because the police are suspicious. He feels really guilty, and confesses everything, but saying that only he killed him, not Frankie. They are both sentenced to 100 years in jail, but Frankie does not return for trial, and runs away. Danny finally realizes that his sister was using him and he tells the police that Frankie masterminded everything. He calls her to ask her to call back, so the police can trace her. She does, and Danny tells her he is angry and betrayed that she used him like any other man. Written by Celine <[email protected]>
Also known as: Bad to the Bone (on a region-free DVD). 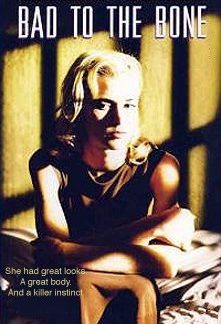