Baby: Secret of the Lost Legend (1985) with English Subtitles on DVD


This sale is for Baby: Secret of the Lost Legend (1985) with English Subtitles on DVD.

5.1
Director: Bill NortonWriters: Clifford Green, Ellen GreenStars: William Katt, Sean Young, Patrick McGoohanSummary: The paleontologist Susan Matthews-Loomis moves with her husband, the unemployed journalist George Loomis, to the Ivory Coast to work with her former professor, Doctor Eric Kiviat, and his assistant Nigel Jenkins in an archaeological site. When George is invited to work in a newspaper in the United States, Susan discovers a bone that she believes is from a dinosaur; but Eric tells that she is wrong. However he knows that Susan has made an important discovery and wants the credits. George packs their stuff to travel but Susan wants to check her discovery and leaves a note to him telling that she will investigate further in the forest. George hires an airplane to follow her and he succeeds to find his wife. Soon they find befriend the native Cephu and his tribe. When they find a family of brontosaurus in the middle of the forest, they feed the animals and become close to their baby. Meanwhile, Eric hires mercenaries to help him to capture the brontosaurus and the militia kills the male ... Written by Claudio Carvalho, Rio de Janeiro, Brazil
Also known as: Baby: Secret of the Lost Legend (on a region-free DVD).

Be the first to review “Baby: Secret of the Lost Legend (1985) with English Subtitles on DVD” Cancel reply 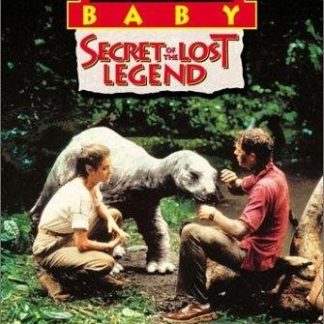