Any Number Can Play (1949) starring Clark Gable on DVD


This sale is for Any Number Can Play (1949) starring Clark Gable on DVD.

Director: Mervyn LeRoyWriters: Richard Brooks, Edward Harris HethStars: Clark Gable, Alexis Smith, Wendell CoreySummary: Although Charley Kying has owned a casino for fifteen years, on one rainy night events and people seem to converge and threaten his family home and second home, his gambling house. After a doctor secretly diagnoses him with a severe heart condition and recommends that if he continues to subject himself to the daily stress of a professional gambler, he hasn't long to live. Later that day he's made to realize that he's been neglecting his faithful wife for years and abdicated his duties as father to his son, who resents his father's unsavory reputation and rebuffs his interest in attending that night's prom. Charley's weakling brother-in-law, who sponges off him by freeloading at home and cheating him out of petty cash as croupier, agrees to conspire with rival gamblers to cheat Charley out of thousands. Among the others who add stress to what would seem to be Charley's last night in the casino are a rich former girlfriend who proposes they renew their relationship, an old nemesis who's... Written by [email protected]
Also known as: Any Number Can Play (on a region-free DVD). 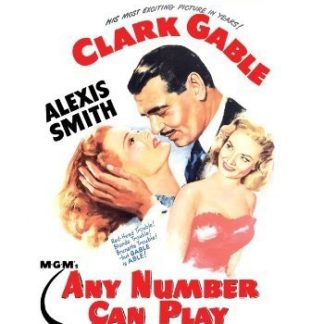