Amin: The Rise and Fall (1981) starring Joseph Olita on DVD


This sale is for Amin: The Rise and Fall (1981) starring Joseph Olita on DVD.

6.1
Director: Sharad PatelWriters: Wade HuieStars: Joseph Olita, Thomas Baptiste, Leonard TrolleySummary: This biographical movie begins with a short blurb about Uganda, followed by the joyous scenes surrounding Amin's military takeover from Milton Obote. He goes about arresting and torturing the rebels. In his freezer he keeps the heads of his rivals and says: "It is a Kaqwa way. I talk to them". Amin then goes about having Asians expelled from Uganda saying: "Uganda is for Ugandas. There will be no more Shahs and Patels. Let them swim back." After the infamous 1976 Entebbe hostage situation where Israeli commandos make a daring rescue of their citizens who were taken into Uganda on a hijacked plane, Amin has Dora Bloch (the only hostage the Israelis couldn't liberate) killed. Amin then goes on to believing he is the 'Hitler of Africa' and promises that he will actually erect a statue in honour of his namesake "in the middle of Kampala". Amin becomes a rather childish and sick psychopath who mixes voodoo, rape, torture, and dancing. He says things like: "I am the best lover of Africa", "... Written by Sujit R. Varma
Also known as: Amin: The Rise and Fall (on a region-free DVD).

Be the first to review “Amin: The Rise and Fall (1981) starring Joseph Olita on DVD” Cancel reply 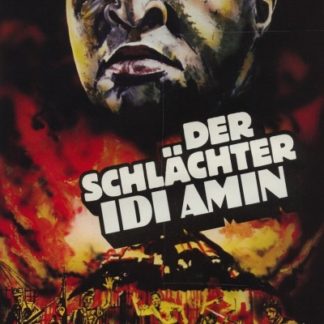