This sale is for American Stag (2006) starring Adam Carolla on DVD.

5.8
Director: Benjamin MeadeWriters: Hammad ZaidiStars: Adam Carolla, Tommy Chong, Melvin Van PeeblesSummary: From the birth of cinema through the 1960s in the United States, most pornographic films were brief, black and white, anonymously produced films known as "stag films", "blue movies", or "smokers," so called because of the smoke-filled rooms where men would gather for private screenings. Initially shot on 35mm film, the advent of 16mm and 8mm consumer film stock allowed for production of about 1,000 of these films between 1915 and 1968. This film examines the "stag" film not as much for the subject matter or lack of production value, but as a metaphor and reflection of American popular culture. Featuring film footage from the largest private "stag" film collection in North America, American Stag is an amazing study of a subterranean phenomena of cinema in the western world. Featuring interviews with Adam Carolla, Melvin Van Peebles, Tommy Chong, Barbara Hammer, Linda Williams, Chris Gore, David Skal, and Rupert Jee. Written by J. Smithton
Also known as: American Stag (on a region-free DVD). 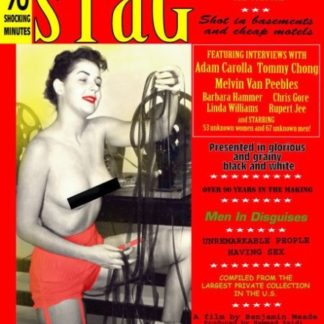