This sale is for American Burger (2014) starring Lena Bengtson on DVD.

4.3
Director: Johan Bromander, Bonita DrakeWriters: Johan Bromander, Bonita DrakeStars: Lena Bengtson, Madeleine Borg, Pär CamitzSummary: A bus load of American students, all jocks, cheerleaders and nerds, are on a culture trip in Europe when they stumble upon a mysterious Hamburger stand in the deep European woods, selling 100% American Burgers. A visit to the Burger Factory behind the stand, renders them trapped in this unknown territory, and they are about to realize that European notion of American Hamburgers is terrifyingly different from what they're used to... The road trip descends into a battle for survival as Americans are treated as cows. Who's going to end up in the slaughterhouse? Will the nerds ever get to score with the cheerleaders? Cliques are formed... Strategies are made... And in the midst of it all they learn a thing or two about friendship, survival, consumerism, horny teenage urges and, perhaps most importantly, to never visit a fast-food restaurant ever again. And the nerds somehow end up having the... Best. Summer. Ever. Written by Anna G Magnúsdóttir
Also known as: American Burger (on a region-free DVD). 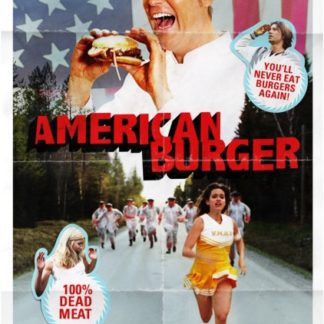