Alone Against Rome (1962) with English Subtitles on DVD


This sale is for Alone Against Rome (1962) with English Subtitles on DVD.

5.8
Director: Luciano Ricci, Riccardo FredaWriters: Gianni Astolfi, Ernesto GastaldiStars: Lang Jeffries, Rossana Podestà, Philippe LeroySummary: A Roman Consul, on his way to fight a border war, stations a garrison of soldiers in a provincial town. The townspeople aren't happy with this situation but decide it's in their best interests to cooperate. However, the Tribune left in charge of the garrison proves to be cruel and demanding. He takes over a house for his own use and forces his attentions on Fabiola, the owner's daughter. She reluctantly submits in order to protect the life of her lover, Brenno, who's already been publicly whipped and who's been hauled off to the local arena to provide sport for Roman gladiators. Soon, Brenno and Fabiola's brother are organizing a resistance which will put an end to the Tribune's reign of tyranny. Written by dinky-4 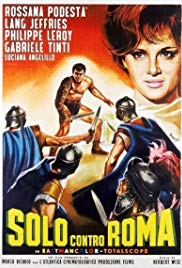