This sale is for Alligator Shoes (1981) starring Clay Borris on DVD.

6.2
Director: Clay BorrisWriters: Clay BorrisStars: Garry Borris, Ronalda Jones, Clay BorrisSummary: French-Canadian adult brothers Mike and Bin still live with their parents in the working class neighborhood of Cabbagetown in Toronto, their parents who largely support them. Mike works a low paying nine to five job hoping to come out the other end with a long term stable career in the trades. Bin is shyster who doesn't really believe in work. What money he earns is in flipping junkers. His M.O. in selling them is to tell his customers of some minor issues with the cars so that they cannot come back to him later with the major issues which he doesn't disclose, he referring them back to the sales pitch and blaming the problems on their improper maintenance. Bin spends most of what he makes at the bar, with his one material extravagance being a several hundred dollar pair of alligator shoes for which he's long been looking. Despite the differences between the two, they will always help the other out of their frequent scrapes in the old adage of blood, at least theirs and their parents, ... Written by Huggo
Also known as: Alligator Shoes (on a region-free DVD). 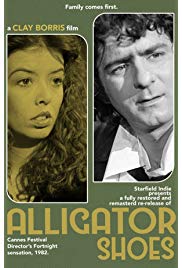