After the Rehearsal (1984) with English Subtitles on DVD


This sale is for After the Rehearsal (1984) with English Subtitles on DVD.

7.3
Director: Ingmar BergmanWriters: Ingmar BergmanStars: Erland Josephson, Ingrid Thulin, Lena OlinSummary: Rational, exacting, and self-controlled theater director, Henrik Vogler, often stays after rehearsal to think and plan. On this day, Anna comes back, ostensibly looking for a bracelet. She is the lead in his new production of Stindberg's "A Dream Play." She talks of her hatred for her mother, now dead, an alcoholic actress, who was Vogler's star and lover. Vogler falls into a reverie, remembering a day Anna's mother, Rakel, late in life, came after rehearsal to beg him to come to her apartment. He awakes and Anna reveals the reason she has returned: she jolts him into an emotional response, rare for him, and the feelings of a young woman and an older man play out. Written by <[email protected]>
Also known as: After the Rehearsal (on a region-free DVD). 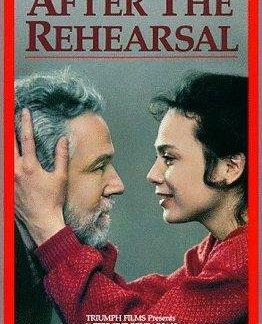