Advance to the Rear (1964) starring Glenn Ford on DVD


This sale is for Advance to the Rear (1964) starring Glenn Ford on DVD.

Director: George MarshallWriters: Samuel A. Peeples, William BowersStars: Glenn Ford, Stella Stevens, Melvyn DouglasSummary: In 1862, during the American Civil War, a company of Union infantrymen, commanded by Colonel Claude Brackenbury, receives an order to attack the Confederate positions. Due to a mishap, the colonel's horse stampedes toward the rear of the front. The confused soldiers, deployed in assault formation, follow their colonel in a rush. This is seen by the consequent Board of Inquiry as plain cowardice in the face of the enemy. As a result, Colonel Brackenbury is demoted to the rank of Captain and his executive officer, Captain Jared Heath, is demoted to the rank of Lieutenant. As further punishment, Brackenbury and Heath, together with a few of their NCOs are transferred West, to Fort Hooker where they are to take charge of a company of misfits and rejects. The new company is designated as Company Q. On the way West, the demoted officers travel on a river-boat. Among the passengers there are several prostitutes, led by Madam Easy Jenny, who are being run out of town by the decent townsfolk. ... Written by nufs68
Also known as: Advance to the Rear (on a region-free DVD). 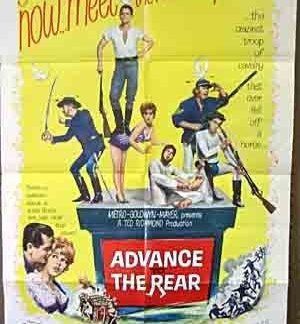